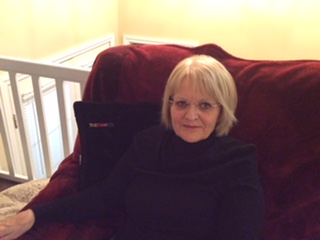 We recently connected with Joan, a dear friend of Thermotex’s Executive Vice President, Wendy Docherty, for over 40 years. Fast forward to the present, and that friendship is still going strong! Joan has turned to Thermotex’s far infrared heat for over 20 years after it helped her soothe chronic body pain before and during her battle with breast cancer. We are so grateful that Thermotex has been her go-to over the years! Joan shared:

“When I was working full time and then working more at home, I would finally get into bed with my legs hurting so bad – I could have cried every night. So, I started using my Thermotex Platinum daily. After placing it under my legs, the pain would be gone. I would also use it on my entire back, especially my shoulders. I found it so relaxing and comforting.

Another health issue that I have been dealing with for the past several years is breast cancer. I was on medication for five years that affected my bones badly, and I was in pain at all times. The only thing that gave me relief was my Thermotex Platinum. When I went for my five-year check-up, instead of my discharge from the clinic, the scan showed a soft tissue mass between my spine and my lung. Many tests, scans, biopsies and small surgeries later, they told me the soft tissue mass was slowly growing. I decided to use my Thermotex on that mass and never missed a day (one of my many specialists told me that the mass is inoperable, but they would have to go in and remove at least a portion if it continued to grow). By this time, I had three months until my next scan. I went to Saskatoon for a PET Scan, and they told me that the mass had stabilized and was not showing up as such a hot spot as it had been. I was so grateful to hear that, and I continued to use my Thermotex every day.

That is my story of how Thermotex has helped me and worked to take the pain away – fast. I have many family and friends that I have suggested get a Thermotex pad, and they all now have theirs on their favourite chairs in their living rooms.”

The Platinum System is the most studied, popular and versatile far infrared therapeutic device in the industry. Boasting 3 patented heat inserts, the Platinum System provides targeted, safe and effective infrared heat to almost every part of the body.

Engineered to flex and wrap to relieve pain and inflammation with far infrared heat therapy; the Platinum penetrates 10x deeper to increase blood flow in large muscle groups in the body including the upper and lower back, hamstrings, abdomen, arms and legs.